Be A Tech Conference Rock Star 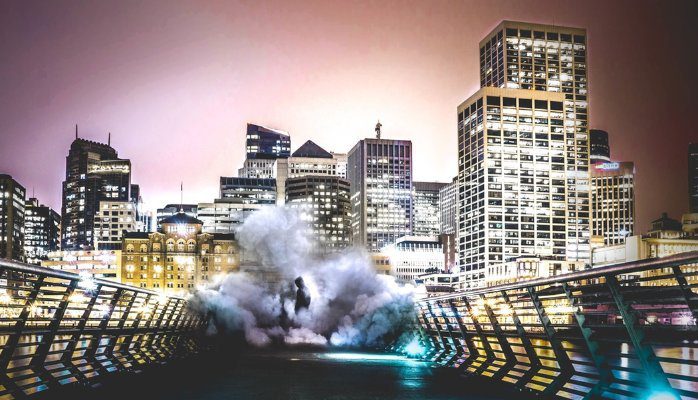 I don’t always attend conferences, but when I do, I’m a rock star

Wouldn’t you love to be saying that to yourself at your next conference? Want to get to a conference and don’t know how to sell it? Here’s how to achieve both.

At the end of September, 2015 thousands of people came together in New York for the annual Strata/O’Reilly Big Data conference at the Javits Center. Now, if you were attracted by the word Badass in the title… don’t give up yet. I’m going to show you how to own any tech conference you attend, ever. So walk with me a few minutes.

At the conference the tracks included Internet of Things/Real Time, Data Science, Data Innovations, UX/Visualization, Hadoop, Law & Ethics, and Spark. For those of you keeping score, every awesome tech buzzword in the data space was included there. You probably also noticed that Strata and O’Reilly were in the title… those are both business working to make money. The over-arching thing to know about a conference run by a company trying to make a money is that a full schedule and buzzwords are more important than quality content. This is why so many people respond to conference sessions using words like “so-so” and “okay” and “wrong level of depth” and “wow, there was that one awesome presentation”. The content just really sucks… This conference was exactly one of those.

Okay so let’s say you convinced your employer to send you to a tech conference. Clearly you are good at sales. Now, how do you actually get value out of being there? This is the question I want to answer for you. The techniques I use turn crappy (big, expensive) conferences in to gold mines. After the techniques I take you through the planning and preparation process. Finally, I wrap it all up in a nice bow with a comic.

So, without further adieu, here are my techniques for getting the most out of a tech conference:

Makes sense right? Let’s take this Big Data conference as a case study. So, the very first step is to make the plan. So, how do you navigate a huge, popular, big data conference to get a successful business outcome? Well, you use big data of course.

To get an idea for what the conference was really about I turned to machine learning to create a visualization of topics based on the rate of occurrence in the schedule (aka a tag cloud). Here is the result: 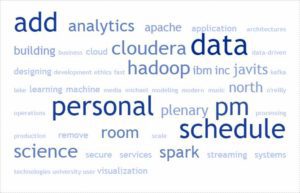 Without getting too deep, you can remove some of the words in there of low relative value, for example “room” and “pm” and “schedule” and “add”. What we’re left with is interesting… The leaders are:

So, I decided to throw out the promoted tracks and pursue these topics. Here is how I did it and some insight into what I learned.

I signed up for Spark Camp. Most of you have heard of Hadoop by now but you may or may not have heard of Spark. These two are like older brother and younger sister. Hadoop is amazing because it stores massive amounts of data distributed on normal disks and searches through it doing math, machine learning, and analysis. Spark puts all of that data in memory instead of on disk and distributes it across many servers, providing the same sorts of abilities. Hadoop came first because the cost of disk storage was far lower far earlier than the cost of memory. Now that memory is coming down the steep part of the cost curve Spark is a naturally occurring product. So, what is different you ask… well, spark is much better at real time data.

Working with Spark is really straightforward and anyone who has programmed before can learn the interface or just write code to make Spark handle data with ease. You can get SOAB (Spark on a box) from many different cloud providers at a minimal cost to learn how to use it. Check out AWS/Spark on EMR for an example. If you want to try this stuff and you’re not familiar with it, just jump in… don’t let the terminology or names scare you like they did me for so long.

Perhaps the coolest thing about a conference is the group of people that comes together for the conference. Those that skip meeting people miss a huge opportunity to network, learn about other peoples problems and solutions, and make connections that can be useful later when back in the real world. Big Data, IoT and the like are all new and there are a lot of startups solving interesting problems in the space. So, my tactic was to crawl the attendee database for folks calling themselves a CEO or Founder and ask to meet them. What better way to find out where all of this is headed. Here are a few of the folks I met. 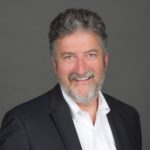 Podium is in the business of the data lake. Podiums take on it is to provide multi-instance Hadoop management, consistent and centralized auth/auth, and visual data file creation based on map reduce. Interesting product if you’ve got multiple Hadoop instances around that you want to manage centrally and consistently… EDW comes to mind. 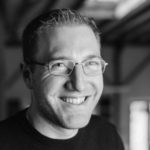 Chris is the COO of satellite startup company Spire. Spire saw that the existing satellite infrastructure was based on huge, expensive units spread far apart. It then went after a data set that could only be gained by changing the rules. The target data is the location of ships at sea and the new solution is to use satellites the size of a bread box to pickup the transponder signals from those ships. Go big picture with me and consider what happened the first time a torch was taken in to a cave… WOW…. there are all sorts of uses for the location of ships more than 50 nautical miles from the shore. Seeing this has never been possible. It’s like Expedia out signing up hotels to come to our global marketplace for the very first time. This was a fascinating personal connection I never would have made in my day job.

“Imagine the first time a torch was taken in to a cave; man could explore something never before seen. That’s Spire” — Jeffrey Kelly 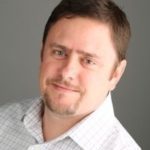 Nathan isn’t in the founder/CEO category, he’s a marketing guy… he actually sought me out. MetaScale is a subsidiary of Sears, yeah, Sears. It came out of the need to move data from many different traditional data stores (mainframes) into something that could run their eCommerce business which is significant these days. It’s great for bringing data out of the old and in to the new but we don’t really have that problem at Expedia… 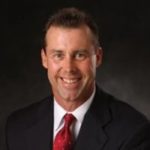 AnswerRocket is out to eliminate the need for people to understand machine learning to get its benefits. Their product started as a natural language interpreter for machine learning analysis. These days it is expanding into collecting data from disparate sources, real time analytics, and reporting/alerting. This product is new and still getting to a feature set that applies to more than one problem area (for Expedia). This was the most compelling product I saw at the conference and their booth was a small one at the back… Watch out… this type of product will wipe out the data analyst job title in the future. 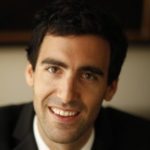 Kaggle is a data science marketplace that uses gamification, in the form of competitions and rewards, to get data scientists to create great models for folks other than their employer. When I met Anthony he though I wanted to talk to him about Expedia’s search data and tailoring results to our customers. I actually had no idea we already worked with Kaggle. I was after considerations around operational data (i.e. log data) and how to use an individual event and a model to decide if it needs human action or not. Great conversation. Interesting business model. I believe that the utopia of pursuing our own path presented in Star Trek will actually be attained through gamification.

On to the next track…

The sessions I attended were all about large amounts of data being processed real time to either change customer experiences or improve operations. All in all, none of the sessions were great for me. There were demos of home-grown spark-based systems for machine event analysis. There was a demo of a system based on Hadoop analyzing sensor data from mining equipment to anticipate when maintenance will be required, pre-order parts, and pull equipment off the field before it broke (UPS is another company who has done this). There were also a couple of vendor talks about how their products are better than the rest. Products are always game changers until you bring real world problems to them.

The only science I really engaged in was around the life-sciences. I signed up for the Data Dash, a 5k-ish run along the middle east side water front. I was able to form a hypothesis of my finish time against other data heads and test the hypothesis. I did better than I expected but then also felt more pain than expected the next day.

All together, a good conference, attended by thousands of people, with a crazy number of sessions and presentations and people to meet.

So, if you want the opportunity to get that paid trip somewhere to attend a conference you need to sell it. To start, if you approach attending a conference as I describe in this article it will be easy to sell as long as it is related to what you do at work. Start by describing the conference, who will be there, and what the sessions are about. Explain what you want to get out of it, for your boss (not you), and how the company will benefit. Then, when you get back, deliver exactly what you said you would… easy. And you’ll have the door open to attend conferences in the future because you actually bring value back from them. #RockStar.